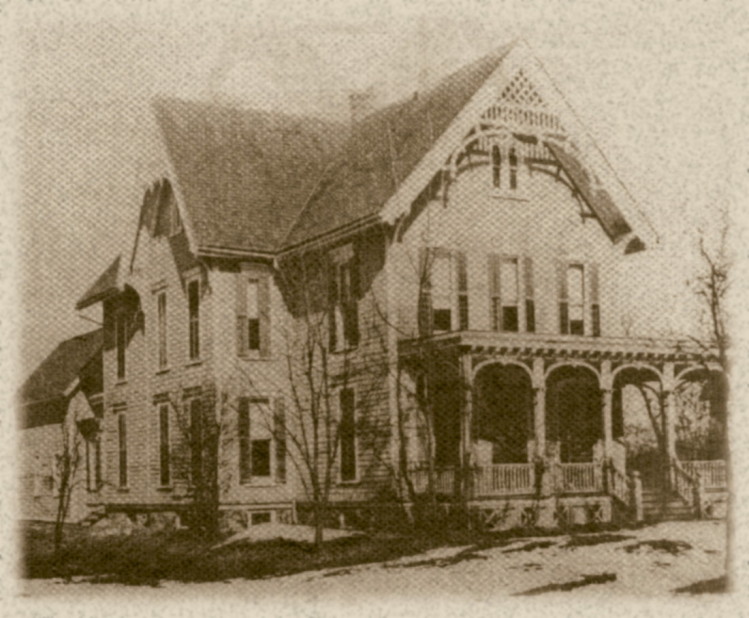 The History Of Round Hill Masonic Lodge #533

On the 28th day of January, 1863 a dispensation was granted to 14 Masons to hold Masonic meetings Under Dispensation.  They were members of Maine Masonic Lodge No. 399, Binghamton Masonic Lodge No. 177  and Otseningo Masonic Lodge No. 435.  This Dispensation was recommended by Maine 399, Binghamton 177, Otseningo 435 and Friendship Masonic Lodge No. 153 , Lodges whose jurisdiction would be affected thereby.  Brother Solomon Lashier was appointed Worshipful Master, Brother Chauncey W. Shipman, Senior Warden and Brother Frank Fanning, Junior Warden of the Lodge named for the Round Hill in Endicott, New York.  These appointments were made by R∴W∴ Clinton F. Page of Binghamton, who was the Deputy Grand Master at that time.  All this occurred during the Civil War in the year when the battles of Stone River, Chancellorsville, Gettysburg, Chickamauga and Chattanooga were being fought.

February 3, 1863 marked the first regular Communication of the Lodge Under Dispensation.  Present were seven members and three visitors.  On February 18th, the first two Candidates ever to receive a Degree in Round Hill Lodge were duly initiated Entered Apprentices.  The initiation fee was Fifteen dollars ($15.00) and they paid a yearly dues of Two dollars ($2.00). On the evening of June 19, 1863 Round Hill Lodge was consecrated by Most Worshipful Clinton F. Page, who had by then become Grand Master of Masons in the State of New York.  The official name then became Round Hill Masonic Lodge No. 533, F. & A. M. under Solomon Lashier, Master, Frank Fanning, Senior Warden, and Lasa Keeler, Junior Warden.

Our early Brothers held their regular Lodge meetings in the old Elvin Theater Building which was demolished long ago. The rent for the first four months was Sixteen Dollars and sixty-seven cents ($16.67) and it continued to be their meeting place until 1907.  Then, the Lodge formally moved to the Commercial Block. That building which still stands just east of the HSBC bank at the corner of Nanticoke Avenue and Main Street in the Union District of Endicott.

It was announced in the communication of May 29, 1883 that the Twentieth Anniversary of Round Hill Masonic Lodge #533 would be observed by a “social and reunion to be held at the Major House” (a hotel which stood on the northeast corner of Main Street and Nanticoke Avenue ).  At the same meeting a motion was made and carried to renew the lease for the Lodge Rooms for a period of five years at Fifty Dollars per year ($50.00). At about this time the Lodge had begun to sublet its rooms to the International Order Of Odd Fellows and the Improved Order of Red Men for Thirty Dollars ($30.00) per year!

On January 11, 1915 a motion was made, second and passed that the Lydia Chase property (where the Lodge is currently located) at 403 Main Street was to be purchased for the sum of Four thousand dollars  ($4,000.00)  to serve as the new Temple and home for Round Hill Masonic Lodge #533. With the purchase of the building it became necessary to include three Trustees among the elected officers.  At a Stated Communication on June 13, 1916, a resolution was adopted authorizing the expenditure of Six thousand dollars  ($6,000.00) for the purpose of making additions and improvements to the newly acquired property.  When the project was finally completed, the cost totaled Nine thousand dollars ($ 9,000.00).  In June 1917, fifty- four years after the Lodge was consecrated, the present Masonic Temple was dedicated with all the appropriate ceremonies.

A Special Communication was called on December 31, 1917 for the purpose of conferring all Three Degrees upon Mr. E.J. Raitt.  The Most Worshipful Thomas Penny – Grand Master, gave a Special Dispensation because Mr. Raitt was about to enter the Armed Forced in World War I.  He had the distinction of being the first member of the Lodge to receive the Three Degrees in one day.

A Special Communication of the Lodge was called on September 25, 1949 at 2:00PM for the purpose of laying a Cornerstone.  This honor was accorded our Craft by Adelphic Lodge #513, I.O.O.F.  One of the mementos placed within the Cornerstone was a Holy Bible from Round Hill Masonic Lodge #533.  R∴W∴ Ward Arbury acted as Grand Master during the ceremony.

The Master, on April 27, 1959, presented a resolution from a steering committee of eleven Master Masons, that a Chapter of DeMolay be formed.  After much thought and labor the Chapter was formed and on February 27, 1960 where sixty-three boys were initiated into the Round Hill Chapter, Order of DeMolay.  The Chapter has functioned continuously since then despite some rather lean years.

In 1963 Round Hill Lodge celebrated its 100th Anniversary in Grand Fashion!  The Optimist Club staged a parade through the Village of Endicott with a Masonic float and 3 Cadillac’s filled with the Masonic Lodge and DeMolay Officers.  Many dignitaries of the Grand Lodge of the State of New York (and their ladies) arrived on June 15th to spend the night in the Proper Hotel.  The events of that day began with the Lodge convening at 4:00PM in the Temple while the ladies enjoyed tea at the Hotel Frederick. The minutes of the meeting mentioned by name 11 Grand Lodge Officers including the Grand Master, his Deputy, the Grand Secretary and the Grand Treasurer. The evening program, held at the IBM Country Club at 7:00PM – started with an organ prelude, the National Anthem, The Pledge of Allegiance and Invocation. After the banquet and all proper introductions, The Triple Cities Barbershop Chorus entertained all in attendance. The Grand Master, Most Worshipful Harry Ostrov – addressed the crowd of 702 persons.  He then presented the District Deputy Grand Master’s Apron to the newly appointed Ezra W. Bushnell and was subsequently given a Certificate of Honorary Membership in Round Hill Masonic Lodge #533. An evening of dancing brought the celebration to its conclusion.

When Round Hill Lodge originally purchased the property, a small house on the east side of the lot, which was separated from the main building by a narrow driveway was used as a residence by the caretaker.  In 1986 the Lodge decided that the tiny house should be removed because of its poor condition. This removal also afforded the Lodge easier access and more parking space for the membership. On October 29th a bulldozer and a truck made quick work of the job. Only a tiny garage was left to provide storage for the Lodge and is in use today.  The  parking lot was fully paved four years later.

Beginning in 1991, Round Hill Lodge instituted a continuing tradition of inviting all Masonic Widows who were still in the area to a Sunday afternoon dinner. Each of the widows is presented with a rose in remembrance of our departed Brother and enjoys entertainment during and after the meal.

Our beloved Lodge has undergone many changes over the years, as would any house with different owners.  The Meeting Room was the first to be rearranged and later, several rooms on the first floor were also created or renovated. Recent additions include a cooling system for the Lodge Room and a lighted flagpole which allows our Nations Flag to be flown day and night. At one time, the basement was used as a Recreation Room complete with bowling lanes, a shuffleboard, a rifle range and two beautiful pool tables. Today, the basement is now seldom used and currently contains a fire-resistant room for record storage. The bowling alleys no longer exist, the rifle range is gone and the once majestic pool tables have fallen into disrepair. The area is seldom entered now but discussions to return the area to its former glory go on today. The roof periodically requires attention, as does the heating system, kitchen, entrances, parking area, bathrooms, landscaping, windows, painting and all the rest.

These changes and upgrades will occur as long as the Lodge continues to own the property. We believe our beloved Lodge will stand and function for a long, long time.  Round Hill Masonic Lodge #533, F. & A. M. has made a good record over time and will continue well into the future.

Mason Of The Year Awardees from Round Hill Lodge

Grand Chaplain from Round Hill Lodge

On March 29, 2003 The Grand Master’s Class was held at the Kalurah Shrine Center in Endicott, New York.  The purpose of the class was to aid in building membership in our Lodges.  On that day, 74 candidates were raised to the sublime Degree of Master Mason. Round Hill Lodge had the following Brothers Raised during that ceremony:

In September 2006 Round Hill Lodge #533 held its In-Lodge Re-dedication Ceremony honoring the 225th Anniversary of Grand Lodge of the State of New York.  This ceremony was to have the Brothers of the Lodge rededicate themselves to Masonry by participating in the recapturing the feeling of taking the Obligation of the Three Degrees of Masonry as well as the Third Degree Charge. Those brothers of the Lodge in attendance for the In- Lodge Re-dedication Program were:  F. David Patch, Douglas Holbrook, Jose’ Valencia, Kack Steenburg, E. Donald Lounsberry, Carl Levine, Milton Carl Northrup, Clinton Hayes, Andy Mattarell, Leonard Levine and William Hush.  Visitors present at the service were:  Edward R. Wells, Lawrence Curtiss and Melvin Junker (Lodge 435), Thomas Barbour (Lodge 1001) and John Sejan, Jr. (Lodge 177).

Other Miscellaneous Dates of Historical Importance